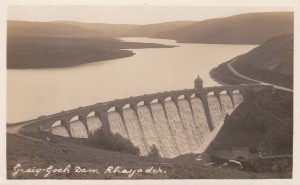 Always a favourite, this is the Wallace Jones’s Studio view of Graig-Goch Dam and lake, at the top of the sequence of Elan Valley reservoirs

One of the joys of attending the Society’s annual conference is the chance to do some preliminary research, seeking out the relevant local literature and, perhaps even more enjoyably, following up with greater on-site knowledge later.

In this respect, Radnorshire didn’t disappoint as a venue, as some really quality publications are to be found on the archaeology and history of this most lightly populated of Welsh border counties. The respective roles of national bodies such as CADW, National Museum Wales, the combined Welsh Archaeological Trusts, or the Royal Commission on the Ancient and Historical Monuments of Wales (RCAHM) is always a key factor county-by-county as to how much is available in print, and just now Radnorshire is fortunate.

Here’s a quick summary of the key titles which relate directly to the three conference themes of Water, Borderlands and Vernacular architecture, and which lead into the wider literature. Various speakers gave each one proper acknowledgement somewhere in the programme.  There’s also a mention of another book which appeared only a few weeks after the conference, and too good to miss.

Magisterial is a word possibly over-worked in book reviews, but it certainly applies without any doubt to Houses & History in the March of Wales: Radnorshire 1400-1800, published by RCAHM Wales in 2005 (344pp, ISBN 1-871184-23-1). In the name of Richard Suggett as author, it does in fact present the combined results of the collaborative project (as all such Commission volumes surely are) which RCAHM ran as a long-term survey of the great and small medieval upland dwellings in the county. Harry Brooksby’s surveys published in the Transactions of the Radnorshire Society take that study right back into the 1960s.

This volume stands now as a companion to the earlier volume on Glamorgan: Farmhouses and Cottages published in 1988. It is a lavish tome, handsomely presenting via building plans, elevations and photographs the amazing quantity (and quality) of what survives, in an attempt to define and date different forms of medieval homestead and to trace their development in the post-medieval period. A champion volume.

Another bonus for anybody interested in the Welsh Border counties is the output of volumes from the Herefordshire-based Logaston Press, some 250 volumes on local subjects since 1985. Attractive and handle-able in various paperback formats, the output of this publisher includes some definitive studies too, such as The Medieval Church Screens of the Southern Marches by Richard Wheeler (2006, 310pp, ISBN 1-904396-51-8). This ‘first major study’ of the subject takes in via a broad sweep over no less than eight border counties the richness of surviving evidence, detailed both chronologically and thematically, right down to the minutiae which provide so many valuable clues.

Suggett and Wheeler’s volumes each contain extensive end-notes and useful bibliographies which make them doubly valuable as portals to their subject matter.

Another Logaston product is Roy Palmer’s The Folklore of Radnorshire, first published in 2001 and in a series by this author of county Folklore titles (260pp, ISBN 1-873827-17-2). It captures the county’s mood very well, and also has a very useful bibliography. Radnorshire’s mood and sense of place is indeed something special in the work of various writers, of which Peter J. Conradi might be especially identified. His absorbing At the Bright Hem of God: Radnorshire Pastoral was published in 2009 by Seren Books, the book imprint of Poetry Wales Press (www.seren-books.com). The author examines both his own relationship with the place ad responses to it by other writers.  This brings us to Kilvert and Chatwin of course and R.S. Thomas amongst others, one of whom we should not forget was Alfred Watkins, he of ley-lines and The Old Straight Track (1925). A rich fabric is woven here.

There are of course lots of other books which touch on the county. The work of one author, W.H. Howse, is worth seeking out. A Radnorshire and west Herefordshire local historian, his county volume for Radnorshire remains a most valuable source of information. Published by local publishers Thurston of Hereford in 1949 (reprinted variously since), it keeps its value and its place as a very informative county history and a good solid period piece.

In early November 2013 another book appeared, very relevant to the conference theme. Radnorshire From Above is a collaborative publication by the Radnorshire Society and the Clwyd-Powys Archaeological Trust, with RCAHM Wales (112 pp, ISBN 978-0-9927215-0-3) and modestly priced at £12. Sub-titled ‘Images of landscape and archaeology’, it contains some superb views (some 115 all told) across what can only be described as a very fine landscape.

Here are prehistoric, Roman, medieval and later sites, many surviving in excellent condition in their isolation, photographed at all times of year and accompanied by detailed, informative captions. Editor Chris Musson has done a fine job.

Some of the sites visited on our coach trip are visible here too. Abbeycwmhir makes sense in its wider landscape setting, seen from above, and the views of the Elan valley dams and reservoirs (no ‘lakes’ here!) are simply staggering in their scale. They also show how after a century the whole water-gathering enterprise now firmly ‘belongs’ in its own landscape.

Go yourself and see.